In this auto reliability ratings interview, you'll learn how Consumer Reports, one of the world's most renowned car rating publications, performs test drives and rates vehicles based on a number of important factors. Find out which cars are the best, which ones are the worst, and some surprising information about vehicle testing and rating.

An Interview with Consumer Reports

In this interview, Consumer Reports associate editor Jim Travers shares a great deal of insight with LoveToKnow readers about the sort of factors that truly make a vehicle a good value. With a wide range of experience and a depth of knowledge in automobiles, Jim Travers brings a wealth of insight to Consumer Reports. In this auto reliability ratings interview, Jim shares details about Consumer Reports tests and offers tips about how you can determine value the next time you're shopping for a new car.

LoveToKnow (LTK): How often does Consumer Reports do test drives and rankings?

Jim Travers (JT): We do ratings all the time. We test upwards of 100 cars a year.

LTK: Do the annual tests cover all different classes of vehicles?

JT: Correct. we'll do family sedans, small SUVs, sporty cars, compact cars - and generally speaking, we'll touch on each of those categories once or twice a year depending upon the popularity of the category and how many new models have come out in that category.

What the Ratings Focus On

LTK: So, you try to focus on the most popular vehicles for that year?

JT: Well, we focus on new vehicles as they come out, and then also as changes get made. For example, if the Nissan Ultima gets a new engine, we'll retest it just to keep our ratings and our information current.

Generally speaking, new cars are usually redesigned about once every five years by most manufacturers. In the course of that five years, they'll make a couple of revisions. If it's a styling tweak, we don't retest. If it's something that is a mechanical difference or a safety difference, we'll retest it.

LTK: So you try to focus on things that affect performance, handling and things like that?

JT: Performance, safety, fuel economy and all around liveability. Reliability is another big one with us, of course. 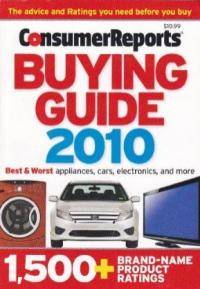 LTK: Do you find that every year there's a model that seems to be a predictable winner?

JT: You know, it's been interesting in the past few years. For a long time, Japanese car makers, particularly Toyota and Honda, led the reliability ratings and scored very well for their fuel economy and packaging, and just quality. That has been changing in recent years. Things have gotten a lot more competitive and we found that a lot of the domestic car makers, Ford in particular, have made some real strides in their ratings overall. They're making some really good sedans. The Fusion is an excellent choice and very competitive within its category. And the new Flex is just a great package as an alternative to a minivan or a big SUV, as it's got lots of room and lots of versatility. Their reliability has improved across the board as well. General Motors has also made some real strides and has some very competitive models that we like very much, like the Chevy Malibu.

But, you know, they're still kind of spotty. Some of the older GM designs that haven't been redesigned as recently don't do as well in our scoring. If somebody is shopping for a car, we certainly suggest that they look at our ratings, which are divided by category, and it'll give you a pretty good idea of how cars score.

LTK: You mentioned that top contenders seem to be changing from Asian car makers to domestic. Has that switched or is it just a general trend?

JT: I don't know that it's necessarily switched. However, the domestics are a whole lot more competitive and putting out some excellent products. The Fusion is a really good car. The Chevy Traverse and GMC Acadia SUV are also very highly recommended. In fact, in terms of family SUVs, the Chevy Traverse was our top pick this year.

LTK: Do you find that each year there's a brand or model that seems to be a predictable loser?

JT: Certainly with the domestics. For example, Chrysler has been struggling in recent years due to financial difficulties and lack of development money for new product. They've gotten a whole lot less competitive. The Ram pickups do very well in our testing, but their sedans have just fallen behind the competition, unfortunately.

LTK: A lot of our readers drive minivans; do you see the minivan market as still very strong?

JT: There's been a lot of shakeout in the minivan market. Basically, the domestic manufacturers, with the exception of Chrysler, have pulled out of it altogether within the past three or four years, but the companies that are still in the market do very well. The Toyota Sienna and the Honda Odyssey are both excellent vehicles, and you can't beat a minivan for the utility. It gets better gas mileage than an SUV, and with the amount of passenger room and cargo room, the versatility is just unbeatable.

The Value of Vehicle Safety Features

LTK: What are the features that you think add the most value to a vehicle?

JT: First, you want to get something that has good reliability ratings and scores well in our testing, obviously. You also want something with all of the latest safety equipment, particularly if you're carrying a family. Curtain airbags are a big life saver, and not all cars have those. Electronic stability control is often said to be the most significant safety improvement feature since the advent of the safety belt.

LTK: Stability control really makes that much of a difference?

JT: Yes, all cars are mandated to have it by 2012, and most cars do at this point. It can make a huge difference, especially if people have kids learning to drive. We basically suggest don't buy anything that doesn't have it.

JT: We do about 50 tests on every car that we drive. We buy the cars and keep them from six months to a year - it's not just a one week quick test around town. We also do have our own test track (a 327 acre facility) and we do all kinds of testing out there.

One of the tests is called the avoidance maneuver, which basically simulates a quick swerve. That's a situation where electronic stability control can really help a car that is not necessarily the best handling car in the world. What it does is it'll selectively apply the brakes and cut the throttle some. That can really make a big difference with keeping a car on course.

Now, if you're looking to save money and still get a really good car, and if it's something that you're going to keep for a long time and don't mind a low resale value, we've noticed that Hyundai and Kia have really improved in our scoring and are making some really competitive cars these days.

Finding Value Without Paying a Fortune

LTK: So do you think that the low resale is just name recognition?

JT: I think that the name recognition is a lot of it. Back in the 80's, when Hyundai first came on the scene in the states, they did have some quality issues. The cars were just regarded as throw away cars, and I think that they're still living down that reputation. The Hyundai Elantra is actually the top rated car in its category.

LTK: Do you have advice for what readers should look for when they test drive a new vehicle?

JT: The first thing that we suggest is to not rush the process. You want to spend at least thirty minutes on a test drive, and you want to drive on a variety of roads - both on side streets and on the highway. You want to see how easy it is for you to park and maneuver the car, how well you can see out of the car, and that it's a car that you are comfortable in.

If you have a family and they will be riding in the vehicle, you want to bring them along and make sure they fit and that they're comfortable. You really have to look at the test drive as a snapshot of what you're going to be doing with that car for the next several years.

As Jim noted in this interview, there is a great deal of effort and care that goes into the testing and rating of new and used vehicles, so when you read vehicle ratings at Consumer Reports, you know that you're getting an accurate and fair review of the vehicle.