The business of buying and selling automobiles has seen some significant ups and downs over the years. The automotive industry is affected by many economic factors, including fuel prices, unemployment, and credit availability. Car sales statistics for the USA can provide a revealing glimpse at the health of this major industry. 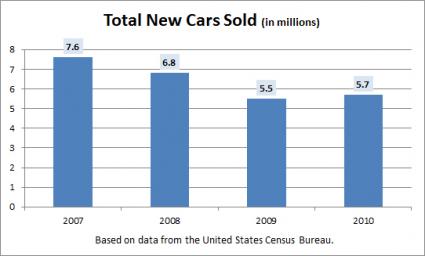 The economic challenges of 2008 and 2009 devastated the automobile industry. The easiest way to understand the decreases in new car sales it to examine numbers from the United States Census Bureau:

To get a clear idea of how various car manufacturers performed in terms of sales, it helps to view the sales statistics for each year.

In 2007, Americans bought 7.6 million new vehicles. According to Ward's Auto, 5.3 million of those vehicles were produced by domestic carmakers, like GM, Chrysler, and Ford. Imported cars, like those from Honda and Toyota, accounted for the other 2.3 million of the new cars sold.

According to the Bureau of Transportation Statistics (BTS), used vehicle sales accounted for $339 billion in revenue during 2007 while new car sales resulted in $435 billion. Both new and used car revenue had decreased slightly from 2006. 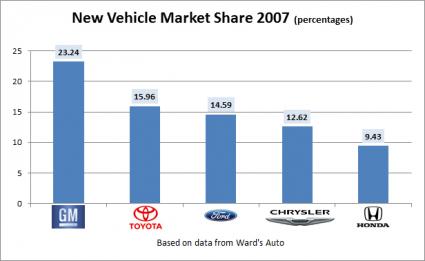 In 2007, Americans bought the most vehicles, including work trucks and other types of business vehicles, from General Motors. The top five automakers for 2007 were as follows:

According to the National Automobile Dealers Association (NADA), the Toyota Camry was the best selling car of 2007. 436,617 rolled off of dealer lots that year.

2008 saw a slight decline in new car sales, as consumers began to struggle with high gas prices and a difficult economy. According to the U.S. Census Bureau, of the 6.8 million new vehicles sold that year, 4.5 million were manufactured by domestic carmakers, and 2.3 million were imported. 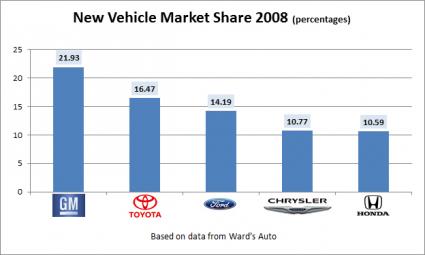 In 2008, General Motors was once again the top manufacturer of vehicles sold in the U.S., including work vehicles. The top five automobile manufacturers for 2008 were the same as for 2007:

According to U.S. News and World Report, the Toyota Camry once again took top honors as America's best selling car. Most car sales numbers declined in 2008 with one exception being of the fuel-conscious Honda Civic.

The total number of passenger cars sold in 2009 was 5.5 million, continuing the decreasing trend of the past years. Of these, domestic car companies produced 3.6 million and foreign automakers produced 1.9 million.

In 2009, cost conscious American consumers spent more money on used cars than they did on new cars. Used car sales in 2009 accounted for $301 billion in revenue, while new cars produced $274 billion. 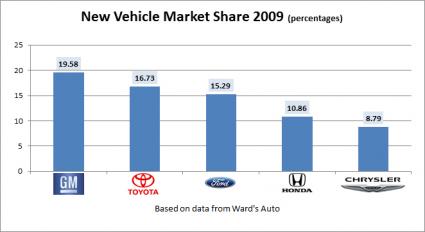 In terms of total vehicle sales, General Motors held onto its place at the top of the pack for 2009, although its market share decreased by about two percent from 2008. Honda overtook troubled domestic car manufacturer Chrysler for the number four spot on the list of top five automakers:

According to Bankrate, the best selling car of the year in 2009 was once again the Toyota Camry. 150,242 Camrys rolled off of new car lots and into consumers' driveways in 2009. Other strong sellers in the passenger car market included the Honda Accord, the Toyota Corolla, the Honda Civic, and the Nissan Altima.

2010 was a slightly better year for the American car industry. United States car buyers purchased 5.7 million new passenger cars, an increase of about 200,000 vehicles over 2009. Of those, 3.9 million were produced domestically, and 1.8 million were imported from foreign car manufacturers. 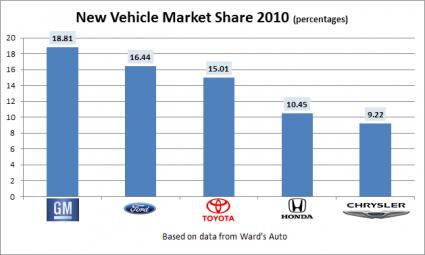 General Motors continued to lose market share in 2010, but it held on to its number one spot. The big upset for the year was between Ford and Toyota. After a spate of recalls in 2009, Toyota lost more than 1.5% of its market share. Ford worked hard to increase the quality and fuel efficiency of its vehicles, and increased its market share by more than a percent, moving the American automaker into second place in overall vehicle sales. The following automakers held the top five spots for 2010:

According to the Chicago Tribune, the best selling passenger car for 2010 was once again the Toyota Camry. However, Camry sales declined by 7.3 percent from 2009.

To keep up to date with the state of the automotive industry and see current car sales statistics for the USA, visit the NADA website. In addition to historical date, NADA offers monthly and quarterly statistics for automobile sales. The U.S. Census Bureau and Bureau of Transportation Statistics both release yearly automotive industry data mid-way through the following year as well. Staying informed about historical and current sales data for the car industry can help you follow trends in this important barometer of the United States economy.