Several inventors can claim to have made the first automobile, although many of those early vehicles did not resemble modern cars. Some were powered by wind and steam, and others were incredibly heavy and slow. However, all of these early vehicles contributed to the development of the today's cars.

Several Important Firsts for the Automobile

Many inventors of different countries take credit for the first automobile, and there have been some quirky and some practical models that sprang from the minds of these inventors. Ask most adults, and they immediately think of Henry Ford's Model T, but this was simply the first assembly line-manufactured automobile. Here's a quick look at the many firsts in the development of the car.

Italian inventor Guido da Vigevano came up with a windmill-powered vehicle as far back as year 1335. The windmill turned two gears, which caused its two wheels to turn. No one knows for sure if this car was ever manufactured.

Around 1478, Leonardo da Vinci designed a vehicle equipped with a clock mechanism-driven motor that even had a differential mechanism for the rear wheel. There is no record indicating that this machine was actually constructed during da Vinci's lifetime, and for many years, historians doubted that it would work if created. However, in 2004, The Guardian reported that engineers created a working car using da Vinci's plans.

Father Ferdinand Verbiest, a priest working as a missionary in China, came up with a design for a steam-powered vehicle in 1678 for the Emperor Cien Lung of China. The car, which measured almost 26 inches in length, was not large enough to carry people. No one is sure whether the car was ever produced.

In 1769, Nicholas Cugnot built a steam-powered vehicle that was so heavy, that in order for the vehicle to drive, the driver would have to place a counterweight in the back. At a whopping speed of two miles an hour and a weight of 8000 pounds, Mr. Cugnot's vehicle was a difficult machine to maneuver unless on iron rails. For the next one hundred years, iron rails were considered the "road" for all steam-powered vehicles. Many historians consider Cugnot's car the first automobile ever made.

Scottish inventor Robert Anderson built the first electric vehicle on record between 1832 and 1839. The car looked like a carriage without a horse in front of it. 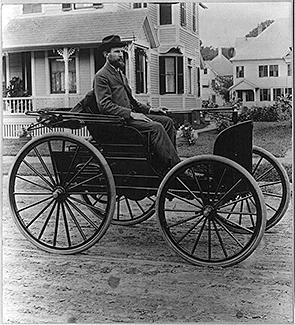 Charles E. Duryea in his invention

Frechman Etienne Lenoir utilized both gas and the internal combustion engine to power his vehicle and drove it from Paris to Joinville back in 1862. The one-half horsepower engine was large, heavy, and didn't produce much financial success for Mr. Lenoir.

Also in 1862, Alphonse Bear de Rochas was able to compress the gas to the cylinder where it would burn. This is actually how modern day vehicles work. Once the gas is present at the cylinder level, it is compressed and them produces a combustion, and compressed mixture is forced out of an exhaust system. This was known as the first four-cylinder cycle engine.

Perhaps de Rochas' most regrettable action was not to patent his four-cylinder engine as Nokolaus Otto did in 1876. At that time, it was simply known as the Otto engine. Otto was credited with what was to become the platform for Daimler-Benz vehicles.

Karl Friedrich Benz built the first true car, similar to the cars people drive today, around 1885 or 1886. Powered by an internal combustion engine and fueled by gasoline, this German car had three wheels.

In 1893, Frank and Charles Duryea manufactured a gasoline-powered car that was able to run on public streets. The Duryea brothers' car featured a four-horsepower, one-cylinder engine.

Ransom Eli Olds, of Oldsmobile fame, began regularly producing gas-powered cars in 1899, one of the most successful being the Curved Dash Oldsmobile. This one-cylinder engine had tiller steering as well as a drive chain. Priced at just a little over $600, the Curved Dash Oldsmobile sold 600 units in 1901, and by 1904, more than 5,000 units were sold. Ransom's selling efforts and popularity made him the first mass producer of gasoline engine vehicles.

Ingenuity Comes to the Auto Industry

Identifying the first automobile made depends on how you define the word "automobile," and the debate may be argued for centuries. However, a few top inventors can lay claim to producing the first vehicles that moved, whether it was by steam, gas, wind, and even a clock mechanism.