It's easy to get overwhelmed when shopping for minivans. With all the features available, the safety ratings, the brand reliability, and other factors, it can be difficult to compare one model against another. The key is breaking down the options and beaming how each minivan model stacks up. To do this, you'll need to know what makes each minivan special and which aspects of each model give reviewers pause.

The easiest way to compare minivans is to look at the top selling models side by side. The following chart, compiled from data at Edmunds.com, the National Highway Transportation Safety Administration, and manufacturer websites, shows how some of the best sellers compare on many important factors:

Chrysler's Town and Country model has pioneered some of the popular minivan gadgets, including stowable seating and sliding doors on the driver's side. However, this model has been slow to adapt some of the safety features of other minivans, including back-up cameras and stability control systems. During more than two decades on the market, the Town and Country has been plagued with mechanical problems and it often receives low ratings for reliability. Reviewers praise the zippy performance of its V6 engine. 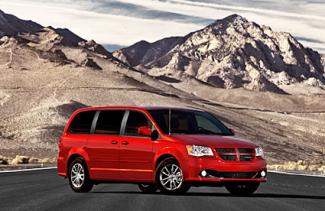 When it comes to available features, reviewers often describe the Odyssey as unremarkable. You can get just about any typical minivan options on this van, but this model isn't known for pioneering new gadgets. On the other hand, Honda Odysseys are famous for their excellent reliability and impressive value retention. Consumers are generally pleased with the performance of the Odyssey's V6 engine, and larger families appreciate the available eight-passenger seating arrangement.

Older Kia Sedona models were heavy and did not perform well when compared to other minivans. However, this van received a complete redesign in 2006, including a lighter body to enhance performance. Reviewers praise the Sedona's roomy interior, although they note that the third seat may only be comfortable for children. All the standard minivan options are available on the Sedona, including an entertainment package, back-up camera, navigation system, and leather seats. Many consumers find that the Sedona is a good value for the money. 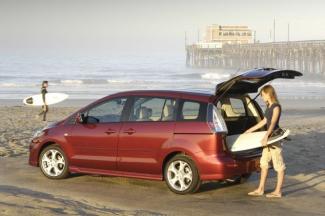 By far the most affordable minivan on the market, the MAZDA 5 is also the smallest and the most fuel-efficient. The limited seating capacity and cargo room make this van an unpopular choice for larger families. However, among smaller families concerned about the environment and cost of ownership, the MAZDA5 has a loyal following. The MAZDA5 is easy to maneuver, but the only engine offered for this model is a four cylinder. Reviewers report that this smaller engine keeps the MAZDA5 from pulling ahead of the competition in terms of performance.

Older models of the Nissan Quest are unremarkable, according to reviewers. However, the 2011 redesign placed this minivan in competition with class leaders. This version sports a peppy V6 engine, easy-to-operate controls, a comfortable interior, and a stylish exterior. On the negative side, this minivan doesn't offer the seating flexibility of some of its competitors. The seats don't fold flat, and the seating capacity is limited to seven passengers. 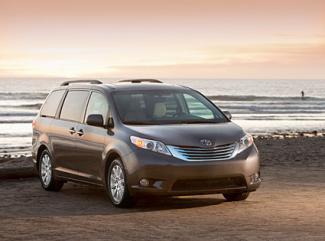 Despite the quality issues that plagued Toyota during 2009 and 2010, the Sienna has a nearly unblemished record for reliability. This minivan is also very popular with consumers for its impressive safety ratings and available all wheel drive. The Sienna offers all the usual minivan options like navigation systems, folding seats, and power lift gates. Many Sienna models seat up to eight passengers, and you can purchase this van with a zippy V6 or an adequate four-cylinder engine.

The Volkswagen Routan is a cousin of the popular Chrysler Town and Country, but reviewers complain that it lacks some of the features that have made consumers so fond of the American model. The Routan does not offer stowable seating in the second row, which limits drivers' abilities to haul a large amount of cargo. Since the Volkswagen Routan has only been on the market since 2009, reliability ratings for this minivan are limited.

According to US News Car Reviews, the following are the three best-rated minivans on the market:

As you compare minivan models, it's important to understand that reviews and ratings are based on several different factors. Choosing the right minivan for you means seeing how models measure up in the areas that are important to you. Some of the things you may want to consider as you compare models include the following:

In addition to looking up safety test results on the National Highway Traffic Safety Administration website, you can use these resources to compare models:

A Minivan That Will Serve You Well

When you compare minivans, it's essential to prioritize the features that are most important to your family. Analyze how you plan to drive this van, how much you can budget for gas, and how many passengers you'll need to carry. Additionally, if you're concerned about costly vehicle repairs, it's a good idea to consider the historical reliability of a particular model. If you do your research and take these considerations into account, you're sure to settle on a minivan that will serve your family well for many years to come.