For many people, their car is a reflection of their personality. There are countless modifications available to personalize a vehicle and one of the least expensive for those looking for a good laugh is a funny license plate frame. They are affordable, accessible and easily swapped when the desire hits.

Drivers who want to express their anger and frustration in a more humorous way will find several license plate holders that are chock-full of edgy attitude. 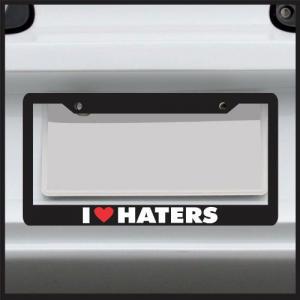 While it can't possibly be the case, the majority of people on the road will claim that they are at least above-average drivers. Then, there are those who are aware of their shortcomings behind the wheel and these funny frames are the perfect fit.

A very common pet peeve is when the car behind is following a little too closely. Disarm those tailgaters with a healthy dose of laughter. 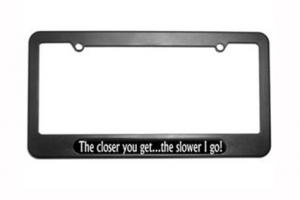 The Closer You Get License Plate Frame

The Appropriate Use of Humor

Just as not everyone enjoys the same brand of comedy in movies, television and standup, the same can be said about funny license plate frames. It is better to err on the safer, more politically correct side of humor if the vehicle is being used for work purposes. A chrome and black frame shaped like a bent golf club may be more appropriate for a manager than a snarky frame with blue language. Similarly, more risque or sexually-geared license plate holders may not be particularly appropriate for teen drivers.

Laughter is the best medicine, but its application should be tempered with common sense.