Many of the features and optional equipment offered by car manufacturers have become pretty common, such as power windows and locks, sunroofs, Bluetooth, and GPS. However, some automotive companies have tried to entice customers with devices not offered by any other brands, resulting in some really interesting features.

For decades, car manufacturers have been attempting to outdo one another with features incorporating new technology to attract buyers. From features that are strange or bizarre, to those that just plain missed the mark, many of these left the consumer wondering, 'Just what were they thinking?'

When you look at a Nissan Qashqai manufactured for the European and Russian markets, it resembles an ordinary crossover vehicle. You'd never know that it possesses one of the strangest new car features: its glass sunroof is designed to be able to handle the weight of a bear jumping up and down on it, even if the bear is only jumping on one leg. (See page five of the brochure.)

The Mini Cooper convertible has a dashboard-mounted openometer that keeps track of how long the top has been down. This feature first appeared on the 2010 models and is still being offered today. The reason BMW reportedly gives for this seemingly pointless feature is that it allows passengers to "measure their visual coolness" while they are inside the vehicle.

The phrase 'gentleman function' used in relation to a vehicle doesn't really explain what this feature does and might cause some strange ideas to go through your mind. However, all it refers to is the ability of the BMW 750i driver to increase the leg room for passengers sitting in the rear seat by pressing a switch to move the front seat forward. This may not be a truly unique feature, but it certainly has one of the oddest names.

The Bugatti Veyron is the fastest car on the road, with speeds recorded in excess of 250 mph. (Bugatti boasts that the Veyron can reach a top speed of 400mph.) In order to achieve this high speed, the driver must use a special key to unlock this car's potential. Use of the top speed key actually lowers the vehicle and adjusts the spoiler for increased speed.

The 2014 Mercedes S-Class offers 'something for every sense' with an aromatherapy system to help 'reduce the stress of driving.' The diffuser comes with your choice of four scents: Downtown, Freeside, Nightlife and Sports. This is an interesting way to keep your car smelling fresh at all times.

The 2001 Honda CR-V came complete with a picnic table. The floor in the cargo area could be removed to become a tabletop, and the attached legs folded out to hold up the picnic table.

The 2013 Hyundai Equus Ultimate came standard with a refrigerator located in the center console of the rear seat. This fridge, which resembled a cooler, was eliminated in the 2014 model.

Car buyers expect to see cup holders in most models now, and Honda wanted to give its customers something a little extra. In 2003, the company added a sauce holder to the Pilot's middle row of seats so that passengers would have a place to store the little sauce packets that come with their meals from fast food restaurants.

Honda offered an optional dog-friendly package on its 2010 Element. This $995 package included a crate with built-in water bowl, a ramp and cooling fan for the dog, and exterior badges that showed the world that your car sported the dog-friendly package.

The Kia Soul was introduced in 2010 and offered an optional audio upgrade with glowing speaker lights that pulsed to the beat of the music. However, the cool factor was shot when a short in the wiring harness caused some fires, and the company had to recall every car that had this feature.

Volvo began offering an option in 2007 that allowed consumers to use the key fob to detect whether or not there was an intruder in the vehicle. This heartbeat detection system was offered on many Volvo models for four years. It was discontinued because most customers didn't utilize the feature. This is one feature that definitely missed the mark. 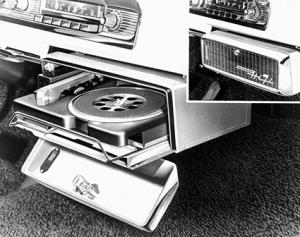 Chrysler offered consumers the option of a phonograph mounted in the dash with its 1956 models. This phonograph was manufactured by Columbia and only played special records designed for it by the same company. This limitation, combined with the fact that bumpy road surfaces caused the needle to skip, made Chrysler stop offering the option after the first year. Refusing to give up, Chrysler offered a different phonograph design four years later; however, the needle still skipped when the car went over a bump, relegating the in-car phonograph to the annals of automotive history.

Not to be outdone by Chrysler's in-car phonograph, Chevrolet came up with an automotive innovation that it offered as an option in the 1957 Bel Air - a Remington electric shaver that plugged into the car's cigarette lighter. This option wasn't as popular as Chevrolet expected, and the car shaver went the way of the Chrysler phonograph.

While a flying car design has yet to be explored, there are some futuristic capabilities that might be in your near automotive future. For example, Hyundai is working on a prototype Genesis with gaze control. This feature would offer a more hands-free driving experience, with controls appearing on the windshield and activated at a glance from the driver. As technology continues to develop at a rapid pace, it will be interesting to see what kind of strange car features we'll be seeing in the future.