If fuel economy is your major concern when shopping for a crossover vehicle, your best bet will be a compact, since the lower weight of the smaller size will deliver better mileage.

The 2014 Honda CR-V received an impressive first-place ranking in three categories by U.S. News and World Report: affordable crossover SUVs, affordable compact SUV's, and affordable SUVs with two rows. U.S. News and World Report also awarded the CR-V the title of Best Compact SUV for the Money. The accolades didn't stop there, since the CR-V was July 2014's top seller in the crossover and SUV segment, beating out 88 other contenders, and was Edmunds' top choice in the compact crossover SUV category. Available in LX, EX, and EX-L styles, all CR-Vs come standard with:

The Honda CR-V delivers 23 mpg in the city and 30 mpg on the highway and has a base Manufacturer's Suggested Retail Price (MSRP) of $23,120. 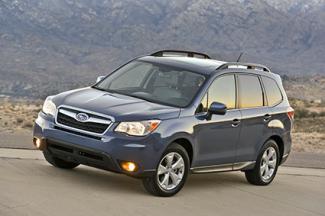 The 2014 Subaru Forester was rated the Motor Trend SUV of the year, while Autobytel and CarPreview.com each rated it the best crossover of the year. The Forester also made the list of Consumer Reports' top picks of 2014. All six models of the 2014 Forester are equipped with AWD and 4-cylinder engines. The 2.5-liter engine runs smoothly with regular unleaded gas, while the turbo-charged, 2.0-liter engine requires premium unleaded gas for peak performance. The Forester boasts the following features on all models including the base:

The Forester delivers an estimated EPA rating of 22-24 city and 28-32 highway, and its base MSRP of $21,995 makes this vehicle the most affordable on the list of top crossover vehicles.

Ranked number one in fuel economy by Edmunds and first in the compact crossovers and SUVs class by Car and Driver, the Mazda CX-5 seats five adults comfortably and delivers an efficient 34 mpg on the highway and 26 mpg in city driving, for a combined mileage of 29. This level of efficiency is only offered in the 2.0-liter model, which sacrifices rapid acceleration for fuel economy, so if you'd like a peppier version, you can opt for the 2.5-liter Touring or Grand Touring models. Standard features on the base Sport model include:

The Grand Touring standard packages include:

The price is also quite economical for a crossover SUV, with a base MSRP of $23,740.

If you're looking for both safety and value, you might want to consider the Buick Enclave. U.S. News and World Report ranked the 2014 Buick Enclave first in two segments: best affordable crossover SUVs and best affordable mid-size SUVs. The Enclave comes standard with:

The FWD and AWD models of the Buick Enclave each earned a 5-star rating from the National Highway Traffic Safety Administration (NHTSA). The safety-conscious buyer will also appreciate the standard rear parking sensors and backup camera in addition to the optional safety features, which include lane departure warning and front collision alert systems. The Enclave provides a generous three rows of seating, so with a base MSRP of $38,890 and 24 mpg on the highway, this crossover SUV offers reasonable value and mileage for its size. 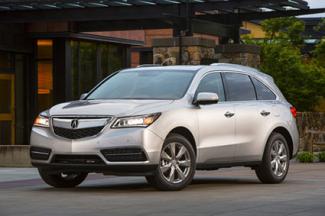 The MDX topped The Car Connection's list of nominees for the best car to buy in 2014 and received high marks from U.S. News and World Report, which ranked the MDX second place in three categories: luxury crossover SUVs, luxury mid-size SUVs, and luxury SUVs with 3 rows. It comes standard with:

Acura also provides the MDX with a generous amount of other standard features, including:

The second row of seats can recline for passenger comfort, and the second and third rows of seats can fold down to accommodate a large amount of cargo. The EPA rating of 18-20 city and 27-28 highway is economical for a mid-size crossover. The MSRP for the MDX ranges from $42,290 to $56,505, and even if you opt for the base model, you'll still be getting a comfortable and luxurious vehicle with a wide array of standard features for the price.

The Toyota Highlander made J.D. Power's list of the top SUVs and Crossovers for 2014. The Highlander also received a strong 4.6 rating out of a possible 5 based on customer reviews at Cars.com. The base LE model sports a 2.7-liter, 4-cylinder engine with six-speed automatic transmission and FWD along with many customer-pleasing standard features, such as:

A 3.5-liter, V6 engine is an option for the base model and is standard with the LE Plus, XLE, and Limited models. An AWD option is available on all Highlander styles, and a hybrid Highlander is an option as well. The spacious Highlander seats eight in its standard three-row configuration with a middle bench seat, but a seven-passenger option is available by replacing the middle bench seat with two captain's chairs. The starting MSRP for the base model is $29,215, while the MSRP for the top-of-the-line Limited Platinum model begins at $43,590. The estimated EPA rating of 18-20 mpg city and 20-24 mpg highway is competitive for the mid-size crossover class.

J.D. Power rated the 2014 Ford Explorer the best-selling crossover SUV of the year, based on sales figures in April 2014. A V6 engine comes standard, and 4-cylinder turbo charged and 6-cylinder twin turbo engines are available upgrades. You can choose FWD or AWD, and both received a 5-star rating from the NHTSA. Its roomy interior provides three rows of seating for seven passengers, and the second and third rows of seats can be folded down to accommodate a generous amount of cargo. Standard equipment on the base model includes:

The Explorer is available in 2WD or 4WD, and its generous 7.6 inches of ground clearance come in handy when going off road. The Ford Explorer is also available in XLT, Limited and Sport models, and all four models feature AdvanceTrac with Roll Stability Control. This crossover SUV is competitively-priced with a base MSRP of $30,015, and its EPA rating of 16-17 city and 22-24 highway is reasonable for its size and class. 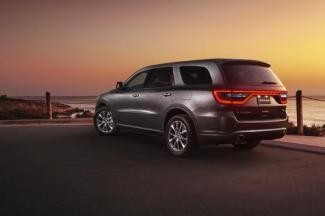 The 2014 Dodge Durango earned the title of best large crossover SUV of 2014 at CarPreview.com, and the 3.6-liter, Pentastar V6 engine that powers the Durango and other vehicles in the Chrysler stable made the list of Ward's 10 best engines three years in a row. In 2013 the independent Insurance Institute for Highway Safety designated this three-row vehicle a top safety pick, and the 2014 Durango received its highest rating of Good in every crashworthiness category. If you are looking for a crossover with heavy towing capacity, the Durango delivers with its 5.7-liter, V8 engine option, but you'll be sacrificing fuel economy, achieving only 14 mpg city and 23 mpg highway on the rear-drive, V8 model versus the 18 mpg city and 25 mpg highway available on the V6 model. The 5.7-liter engine has a towing capacity of 7,400 pounds, while the 3.6-liter engine can handle 6,200 pounds, so you must keep in mind that the weight of payload being towed can drastically reduce the mileage. The Durango is equipped with an 8-speed automatic transmission, and an AWD option is available with either engine. With a base MSRP of $29,995, the Dodge Durango delivers economy pricing in addition to power and size.

Your Next Crossover SUV